John Patrick Bray has written plays under grants from The National Endowment for the Arts and the Acadiana Center for the Arts in Louisiana, and has earned commissions from theatre companies and arts agencies around the country. He has been a Semifinalist for the O’Neill National Playwrights Conference and for the Princess Grace Foundation Playwriting Award, a Finalist for the Kernodle Playwright Prize, and Winner of the Appalachian Festival of Plays and Playwrights (for Friendly’s Fire, which led to its premiere at Barter Theatre). His plays have been developed at The Actors Studio, the Last Frontier Theatre Conference, The Word at the Road Theatre, Epic Rep. at The Players’ Club in NYC, Athens Playwrights’ Workshop, The New School for Drama’s Alumni Play Project, the SF Olympians Festival at EXIT Stage Left, and have been produced around the US (including productions with the Samuel French Off-Off Broadway Festival, FRIGID NY, and Planet Connections Theatre Festivity), and in Canada. His plays and monologues are published with Applause Theatre and Cinema Books, Smith and Kraus, Original Works Publishing, Next Stage Press, JAC Publishing, Heartland Plays; and in The Coachella Review and Masque and Spectacle. A collection of his shorts, Cart Before the Horse, has been published by Polychoron Press. He serves as a resident writer with Off-Off Broadway's Rising Sun Performance Company. Bray is also the co-screenwriter of the BEA Award-Winning indie feature Liner Notes (based on his stage play) which was an official selection of the Woodstock Film Festival and Hoboken International Film Festival (finalist, Audience Choice Award); Liner Notes is distributed with Distribber and is available on Amazon (dot) com. At UGA, Bray teaches the dramatic writing sequence and theatre appreciation classes. He has earned a Sandy Beaver Award for Teaching Excellence, and has been an Online Learning Fellow and a Teaching Academy Fellow. His essays have been published with Theatre Topics, New England Theatre Journal, Texas Theatre Journal, Theatre Symposium, Platform: Journal of Performing Arts, and Theatre, Dance and Performance Training. He has contributed a co-written chapter to Mapping Smallville and a chapter to The Composer on Screen. Bray’s textbook, Inciting Incidents: Creating Your Own Theatre from Page to Performance, is published with Kendall Hunt Publishing (now in its second edition). Bray co-edited The Best American Short Plays 2015-2016 with William Demastes and edited The Best Plays from American Theatre Festivals 2015 for Applause Theatre and Cinema Books. Bray serves as a Dramatists Guild Atlanta Region Ambassador and he is the co-founder of Athens Playwrights' Workshop, which meets on alternating Mondays at UGA (non-curricular - open to all!). 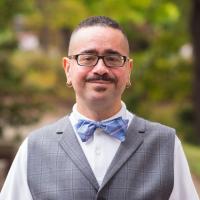